Ohio to Ft. Wayne on the Lincoln HighwayGoing west from the Ohio border....

Three versions of the Lincoln Highway. Far left is current US 30 (divided 4 lanes), in the middle is an abandoned 1928 (or earlier) section for the improved curve of the far right routing (now old Lincoln Highway). (Picture taken in July, 1998) 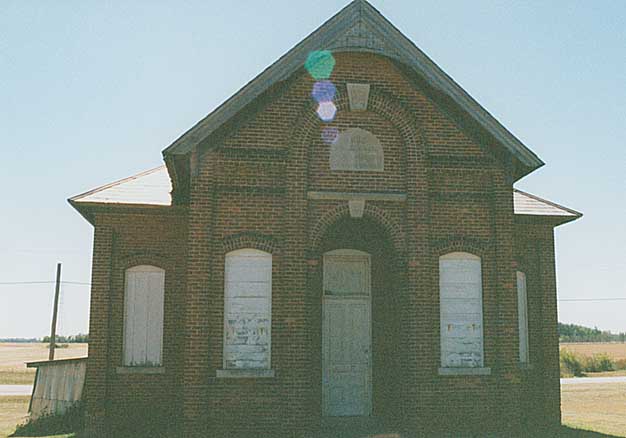 This is an old school house nussled between old and older Lincoln Highway (old LH is behind the school, I'm standing on a 1913 routing to take the picture). The French Catholic St. Louis Besancon Church is behind me. (Picture taken in September, 1999)

Even though this street underneith I-469 is named Lincoln Hwy, it is NOT the Lincoln Hwy. The Lincoln Hwy. designation leaves 'Lincoln Hwy' back in New Haven. Make sense? I-469 east of Ft. Wayne (June, 2003)

Someone wanted a traffic light for their driveway so they could get onto Ind 930 in New Haven (June, 2003).

This bread sign is supposed to be famous for something (maybe just being there). Just east of Downtown Ft. Wayne (June, 2003)

One of Ft. Wayne's skyscrapers. Tim Bristow wrote to me in August of 2004 to refresh my memory and give me some more information on this building.It is called the Lincoln Tower, because it was built by the Lincoln Bank in 1929. Tim has also been told that this could be the first skyscraper constructed in Indiana. Photo taken from a parking lot near the Lincoln Museum (August, 1998)

A remnant of the 1980s. When was the last time you saw a Diet Pepsi sign outside a restaurant (with a 1970s Pepsi sign in the foreground)?

The Diet Pepsi design looks as it's from the early 80s.

This is the Wells St bridge. Built in 1884 it was the first crossing for the Lincoln Highway over the St Mary's River in 1913. This Whipple through truss ironbridge was recently rebuilt in 2000, and is on the National Register (from June, 2003)

This refurbished train station stands on the west bank of the St. Mary's River between the Harrison and Wells St bridges.And no, the man in the blue shirt was not coming after me for taking his picture. :-) (June, 2003)

A crossview of the Harrison St. Bridge. When it was rebuilt in the 1980s, the five concrete arches were removed in favor of three concrete supports.

Looking across Harrison St and the bridge. At least the railing and light fixtures stylings were kept from the original design.

Many people thought this continuation of the Harrison St. Bridge went over an abandoned canalbed. Alas, this was a railbed (long since removed) that went along the river (see the depot picture above).

Bottom Left - All the Allen Co and Ft. Wayne Politicos when the Harrison St. Bridge was rebuilt in 1987. Unfortunetly they slapped their self celebratory plaque right over a LHA marker on this bridge marker. At least they saved the mention of this being a LH bridge and the milage to the two end points.

You can see some of the less than satisfactory repair work done on these plaques.

All three pictures taken in June, 2003

Assistance in Ft. Wayne photos text provided by ARCH's LH Landmarks in Allen Co pamphlet (supplied to those at the 2003 LHA National meet in Ft. Wayne)

Questions, comments, and submissions can be sent to Sandor Gulyas